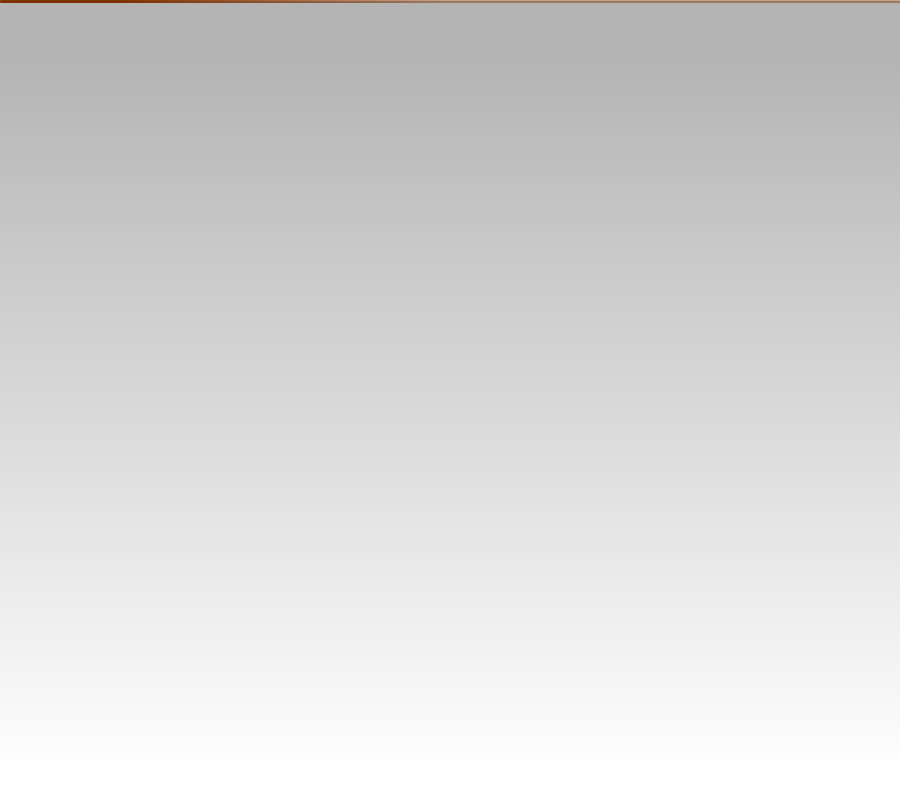 Search for a Guzzi

After several 2-valve boxer BMWs, I was a bit bored with this brand in 1999, the last model I owned at that time was an R100RS from 1982. I wanted to have a Guzzi for some time and the search could begin. The BMW had (on paper ...) 70HP and I didn't want to take a step back with the power, so only the Le mans 1000 was eligible, but that model didn't really appeal to me. The Sport 1100 and Daytona are very beautiful, but too sporty for me. Then only the Mille GT remained, which I had already noticed during the introduction. It is a pity they didn’t use the Le Mans 1000 motor in the GT. The solution came after a visit to a Guzzi dealer, there happened to be a 1000S for sale. A beautiful, classic-looking machine with a Le Mans 1000 motor and even better in design than the Mille GT. At that time I didn’t know the existence of this machine from the Dutch motorcycle magazines, because they never wrote about this model.

Unfortunately, the price for this used machine was very high. Much later still decided to buy this motorcycle, after all, the 1000S is rarely offered in the Netherlands. On the image you can see what the 1000S looked like at the time o 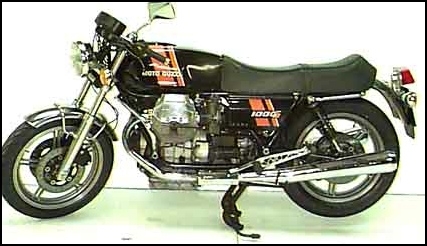 f purchase. The previous owner had put low exhausts on it because of the panniers and the footrest carriers were painted silver. The BMW was not sold immediately, more about that later. When looking more closely at the new acquisition, it turned out that the maintenance was not performed as well, despite the fact that the engine was always in ‘their maintenance'. The promised full service on delivery also turned out not to have been carried out. Afterwards it turned out that this machine had never been serviced there, I was told by the previous owner. The battery was bursting with battery acid, the old black oil was still in the motor and the oil filter was not replaced. I could go on and on. Not much later, during my first trip abroad, the engine failed. The fuse of the Silent-Hektik ignition was blown, this is a fuse the size of a small grain of rice. I have managed to bridge this with some silver paper and so it went on hard towards the house. But the bad luck had wasn’t over, the gearbox also thought it was enough and started to crack and rattle. Carefully drove home and changed gear as little as possible. That was the start of the overhaul of the entire engine, because I was fed up with it. Unfortunately, even more problems appeared. And then the BMW came in handy again, because I didn't have a car. Confidence in the Guzzi had sunk in a short time.

The buddyseat pictured above still proved to be disappointing. The new filling even softer than the original and also appeared to absorb water ... so have it done again, but the result was still disappointing. The solution was a Corbin buddyseat. Nothing is available for the 1000S, but the version intended for the Le Mans 850 can be made to fit the frame. This is a lot better, especially because the seat has also become wider. The only drawback is that it is relatively hard, but on long journeys this is preferable to a soft filling. In the meantime, the Corbin is also equipped with extra filling and a new cover. A little higher and a slightly softer filling. Perfect!

From Keihan I bought a complete stainless steel exhaust system with "thicker" exhaust pipes (photo above). These pipes have the same thickness (42mm) on the outside as the original from Guzzi, but are not double-walled and also have no narrowing at the balance pipe connection. The quality is good and a 10-year warranty is given. This system is a copy of the Le Mans III exhausts, but perhaps even quieter than the original factory exhausts. Eventually I mounted the original 1000S exhausts, while maintaining the Keihan exhaust- and balance pipes.

- Replaced the rear light with an oval version with smaller dimensions.

-New Koni shock absorbers (those were then still available as Koni, now it has been taken over by Ikon).

-Fork gaiters for the protection of the inner legs / seals and I also think looks better.

- Various parts are powder coated, except for the frame that was still fairly okay.

- Luggage racks and rear rack for the holidays, but they are actually always mounted.

-Adjustable handlebars from Verlicchi to improve the sitting position. 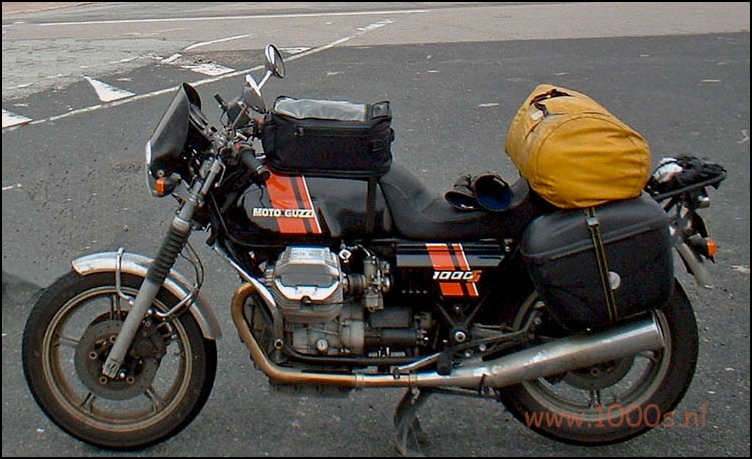 Unfortunately I don't have a good photo without luggage from that time, this is in 2005.

In 2005 I bought a Moto Guzzi Sport 1100 from 1995 in Belgium with sliding damage to the bodywork and the exhaust. Not really a nice one, so everything was made presentable for the import inspection. The plan was to turn it into a naked bike, but that turned out very differently. It took too much work and costs to get the whole to my liking. So the motorcycle was dismantled after I only drove about 120km with it...the inspection was a waste of money. The dismantling was mainly because the engine would be nice to use in the 1000S, so there was enough work again, transplanting it in the 1000S. 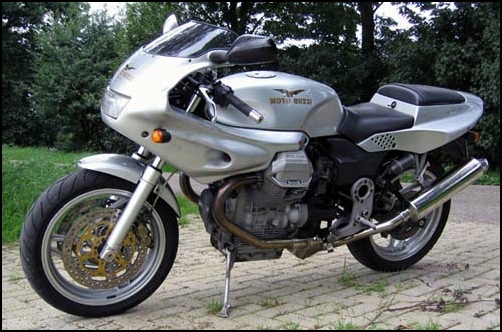 I decided to have the gearbox overhauled, I would rather not start it myself and there was already enough work. All bearings, shift forks and some special parts have been replaced. The main cause was a loosened nut, because the securing had been rusted through. After the overhaul all oil turned out to run to the final drive, because the O-ring was incorrectly placed by the dealer on the output shaft. So there was almost no oil left in the gearbox and that just after an overhaul! I blamed a leaking oil seal that the final drive lost a few drops of oil, but it turned out to be full of oil from the gearbox. I replaced the o-ring myself and placed the corresponding steel rings in the correct order. It is only a small mistake, but it can have major consequences.

So it leaked oil, with the above story as the cause. But there was more to it, pieces of tooth were broken off the pinion. That is the only thing I had repaired under warranty at the selling dealer. Unfortunately, that also did not go well, the new tooth pair (pinion and crown wheel) was adjusted with too little play. So there again to get started yourself. This is a precise job, because the teeth must engage exactly in the right place. This can be adjusted with shims for the crown wheel and pinion. With each adjustment, the rear drive must be mounted together and checked for the correct toothprint with special paste on the tooth. Lipstick turned out to be a good alternative for this :-) After 60,000 km I had it apart, the teeth were still looking good.

Some parts were worn out:

- Camshaft and tappets with pitting. Replaced by a camshaft with more torque from lower revs. 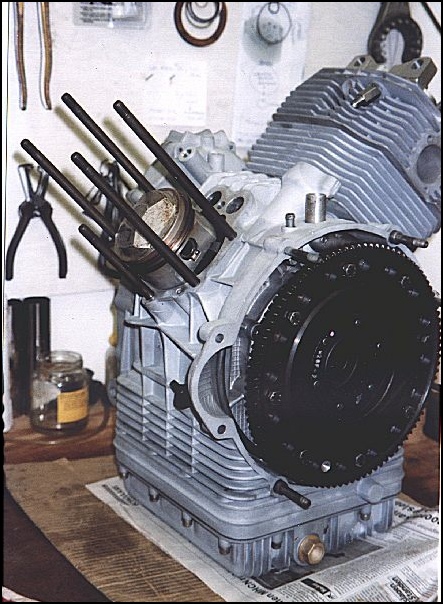 Because the engine and gearbox were dismatled anyway

and the paint was fading, I had everything sandblasted with glass pearls. The older Guzzi’s always had the castings non painted.

The clutch plates have been preventively replaced. The heavy

flywheel is lightened and the starter ring provided with extra holes. The result is a faster revving engine, which also makes shifting smoother, because the rotational speed drops faster. 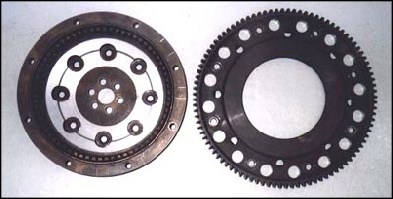 The engine already had two spark plugs per cylinder head when purchased, but the oil drainage from the crankcase breather on the cylinder head was no longer present. The oil line was in the way at that spot, which needed a different spot because of the extra Spark plug. For the return line I have applied the system of the older blocks. That is the small pipe that runs back to the crankcase behind the flywheel. (see photo on the right at the starter motor cutout)

In addition to the overhaul of the entire drive system, the appearance has also been modified, such as the buddy seat, turning signals and the exhaust system. See the photo below. 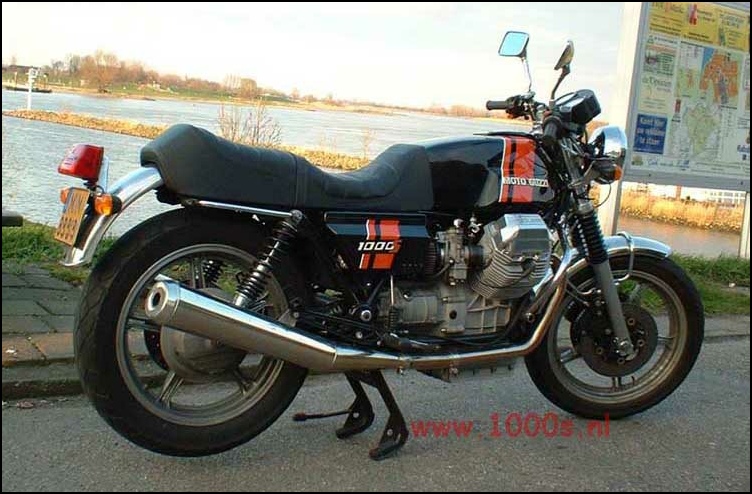 Shortly after the 2002 revision